More of the Rest: Early Recordings 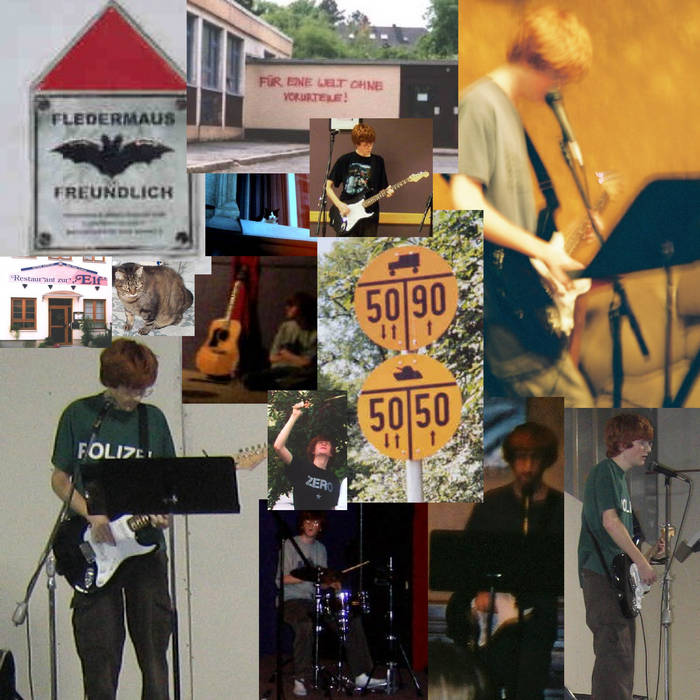 This is a collection of recordings produced long before the first Nowhere Man album. I was very much still learning what I was doing, and the quality reflects that. Nonetheless, I still value the songs and the spirit. Many of these were distributed among and performed live for friends and classmates under the moniker Folkor. Tracks 2, 5, and 11 were regrettably only archived in lossy quality.

Thanks to Alyssa, my family, Josh, Julius, Gavin, Hanna, Chris Shaw, VOSDesign, Taylor, Rebecca, David, Eric, Patrick, and everyone else who positively influenced the creation of this music.

Cover photography by Patrick Vacek, Meredith Vacek, Kathryn Vacek, Brad Sanders, and Lori Eberhardy. This montage was originally used as the basis for the cover of A Good Door Needs No Lock, a limited-release live album from 2005.

Track Name: Land of the Free
Welcome to America, land of the free
Get rich and buy anything you see
We won't hurt you, we won't oppress you
We'll just round you up for no reason at all
You just want a simple life in the land of free?
That's no problem, if you're skin's the right color
But if we suspect you of what you'd never do
We are quite prepared to take all your rights away

Now get up and sell all you own
Report to us quick so we can put you away
Forget you're a citizen, forget you're human
Just 'cause how you look, you've been damned to this fate
If it wasn't enough, we have built ourselves a bomb
Just to show you up we'll drop it on your native land
Incinerate them all, just because we can
No one can stop us 'cause we're the land of the free

Just don't forget we've built ourselves a bomb
We think we know how to use it right
Round them all up just like animals
That's how it is in our land of the free
Track Name: I Will Be
High, I want to be high
High atop a mountain
I want to stare at the sun
And laugh in its face
I'll wait for the moon
Just to spite all the stars
Just to spite everyone
I'll stand at the cliff all day, all day long
I'll look at my feet and I know what I'll see
I'll see the moon, I'll see Mercury
It'll all be upside down, it'll be oh so pure

And I'll dream and I'll scream
And I'll be everything I ever wanted
I'll be me, I'll be you,
I'll be a little bit of everything

I'll taste like dust, I'll look like a tree
I'll be everything and so much more
I'll have it all, I'll be it all
I'll never look back
I'll swim in the sea and I'll be so free
I'll be everything and so much more
Track Name: Winter Nights
I walk the streets while the rain falls
The sky is dark and the buildings empty
Demons haunt my mind, I can't remember anything
The clouds above hide the truth from my eyes

To love and to lose
To know and forget
To have and to break
To act on something you don't understand
You don't understand...
Track Name: A Flight to Nowhere
Would you please tell me which way is up?
I think I've forgotten, I think I never knew
I'm not asking for too much
My desires are quite plain
And now I know why everything I write sounds the same
I think I'm lost but I never want to find my way again

Follow a path or wander aimlessly
Alone yet in company
Just how it always is
You know your friends
Or you thought you did
Go away and come back to find
Nothing's quite the same anymore
People change, you can't deny
They always says to keep on going
Just tell me what you think you'll find at the end
Track Name: Machine (An Apology) [Live]
You had grown so old, we were such good friends
You served me so well, you never let me down
You weren't perfect, but no one is
You didn't have it all, but nobody does
You had your flaws, but you weren't alone
You had your scars, but you weren't the only one
I learned so much with you
You knew how I felt, you always heard me
We did not share a common thirst
But we shared so much more
And I had to end it, I had to look too far back
I destroyed what had been built
No apology can ever make it up

I can't believe - what have I done?
Everything was fine till I came and screwed it (all) up
Please forgive all the mistakes I've made

I look back and I can't believe
How'd I live like that, be so foolish?
I became the thing I hate
Who has the power to forgive me?
All alone, staring at the distance
I lost myself, forgot what I was doing
Reawoke to curse myself
Curse the sky and curse the thought
Of all my hypocrisy
Track Name: Ruby Eternal
You have become such a part of me
You and your friends, I never would have thought
That you would mean so much to me
I didn't really know you
I didn't realize just what you could be
Somehow we met and we seemed to match
Just how we'll never ever know

You fill my lonely days and lonely nights
This is not just some plastic passion
You inspire me, you help me keep on going
I don't know what I'd do if I didn't have you

In you I've found an exit
When I thought that there were none
I've found a new escape, much better than before
The answer to all my fears
I think of me and who I used to be
I've changed so much or was it everything else?
We don't know what's real, we don't know what's true
We don't know anything at all
Track Name: From a Windowsill
Looking at the window
At an old oak tree
I see the cars below
And the church across the street
There are some times like these
When I miss those old days
Thunder strike and knock me down
I don't want to go through this again

I'm so very scared
But I just can't help it
What can I do?
I can't help the way I feel
Back then I never understood
Anything about life
What could I do but
Coolly accept what came my way?

What if nothing changed in eight years?
Everything feels different now
Could it possibly turn out the same
If I had to do it again?
Some days nothing ever seems right
Thunder strike and knock me down
I don't want to go through those days again
Some days nothing ever seems right
Track Name: A World in Half
My world is my world
And it's not quite yours
I've always wondered
What the difference is
Was there once a time
That they were the same?
Can I ever know
Or understand you?

We are so similar
But there are certain things
I must say, we can
Never reconcile

I want to comprehend
What must be impossible
I can never win
Oh, what's the difference?

I could feel love, I could feel hate
I could understand almost everything
I swam in the sea and I felt so free
Suddenly it went black and I awoke from that dream