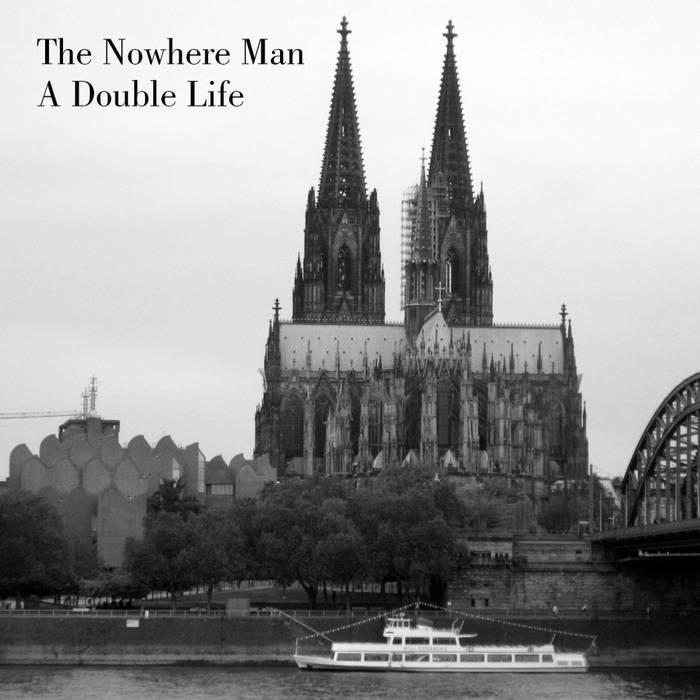 The third album by The Nowhere Man. The result of a year of living in Germany and six months of recording. Primarily written and recorded with an acoustic guitar I bought in Hannover.

Recorded, mixed, and mastered by Patrick Vacek at the Pestalozzi Palace, St. Louis, MO, November 2010 – May 2011, except for the following: drums on tracks 3 and 11 recorded at Craig's apartment, drums on tracks 1 and 7 recorded and mixed by Brad Schumacher in association with Oo-de-lally Audio, and track 13 coda recorded July 2008 at the Laughing Street Studio, Böttingen, Germany.

All instruments and vocals performed by Patrick Vacek, except for the following: drums on tracks 3 and 11 by Craig Hurst, drums on tracks 1 and 7 by Austin Case, additional vocals on tracks 5, 8, 10, and 13 by Joshua Potter, and Tuvan throat singing on track 1 coda by Paul Donnelly.

Thanks to all the wonderful people and organizations I got to know while living in Germany: Alina, Henrik, Iris, and Michael; Herr Mainka and the Carl Duisberg Centrum Köln; Andrzej and Daniela; the Fachhochschule Hannover Informatik Abteilung and the FHH Erasmus students; Natalie; Arkadius, Raphael, Felix, Bernhard Esslinger, and the Cryptography Competence Center; the Congress-Bundestag Youth Exchange; and Candice, Emma, Mackenzie, Elaine, and the rest of the 26th PPPler. Special thanks to Margaret and Theresa for the bodhrán. Additional thanks to my family and friends for their support.

Track Name: Leaving Saint Louis
I'm leaving Saint Louis for the last time
I've finally hit the end of the line
Time to head off and find a new home
I hate to say it but I've got to move on
Maybe one day I'll find my way back
See my friends and the familiar sights
Relive the memories of a good life
Restore the bonds that had been so strong

I'll miss my friends that taught me so much
I'll miss the places where we used to hang out
I'll miss my brother and all his crazy films
I'll miss my cat and the scars he'd give me
I'll miss the girl I fell in love with
I'll miss the nights we stayed up so late
I'll miss the mornings when we stayed in bed
I'll miss the everything we shared together
Track Name: Autumn's Summons
Every winter is colder than the last
The days seem shorter than I recall
The darkness comes too soon, day becomes night
Seasons come and go before my eyes

Does my memory deceive? Does it lie?
Each year is a surprise – it makes no sense
I seem to forget what I know is to come
In my memory, it's always bright and warm

How can I trust my mind?
A haze covers the past
The gaps are obvious
I can see something lacks

There's a darkened shroud lying over me
It's subtle and gray but I can tell
Seasons remind me that life is not constant
It's a lesson that I should learn soon
Track Name: Street Song
I don't know why, when I look at the sky
I feel something special
You can tell, if you listen well
I say it rather often
When I'm alone and I'm walking home
There's something reassuring
I like to see where the moon might be
Let's hope it isn't hidden

There's something strange about the change
Of living how you want to
They call it free, and perhaps it could be
But there's something more behind it
If you know where you want to go
Don't let them try to stop you
When the morning comes, if you didn't have fun
Well, what was all the worry for?

It's getting late, I should be in bed
I need to sleep, life continues on
These thoughts keep me awake at night
How did I end up here and now?
The journey was long, I think
It's one of those things, you know
Track Name: Erkenntnis
Es ist eine Weile gewesen
Seitdem ich bemerkt habe
Dass ich in Deutschland lebe
Nicht mehr in Amerika
Etwas kann nicht richtig sein
Wenn der Reiz fast verschwunden hat
Ist es nur die dunk'le Tage
Oder ist etwas Anderes los?

It's been a long time
Since I've considered the fact
That I'm living in Germany
I'm not in America anymore
Something can't be right
If the charm has nearly faded
Is it just the dark days
Or has something else gone wrong?

Perhaps the loneliness
Is just too much to handle
Perhaps I miss my family
And my friends too much
This is not just some short break
I'm really, truly doing it
And now here's the big question:
Could this really be my true home?
Track Name: Modern Age
Way up in the air, the sky is falling down
If the clouds would move, there'd be lights everywhere
Little lines and dots, moving through the space
Burning up before too long, way up in the air

Leave the city lights, head out by the river
Standing in the dark, head turned to the sky
And the time is drawing near, when you'll come and free my mind
So I wish the days go fast, while I wish the days go slow
Always so much on my mind, where to go and what to do

She was here with me
In my corner of the world
So beautiful, but so short: such is life
I'm only allowed to have one dream at a time

Winter in Hannover is cold and lonely
After Christmas and a visit
The markets are over and nothing's going on
Therefore I need to go away somewhere
I have a single destination, the best in the land
The fastest train takes two hours to get to...
Berlin!

I arrived early, so I'll walk the whole way
From Potsdamer Platz to the Bauhaus Archive
Northwards to the Victory Column, eastwards to the big gate
It's cold, it's dark, but today is New Year's Eve in...
Berlin!

Friedrichstraße, over the Spree, grab a snack, move onward
A small bar with punk music, two bands and endless beer
A short break at midnight, everyone hits the street
Fireworks and snowballs fly across the entire city in...
Berlin!

This city has an energy
A spirit, a feeling, a magic
History lives and breathes here
Music and art are all around in...
Berlin!
Track Name: Firebombs
I don't know which is worse –
The way it ended, or the way it began

I know the whole thing was cursed
But why would you go and make it worse?
An eye for and eye leaves everyone blind
What more reason do you need to find?

If you go to the homeland
You can see they will not forget
It would be impossible
When you're reminded everywhere
If you look at old pictures
You will see it was all different
And the reason's not just progress
It's because we destroyed it all
If you're counting atrocities
Don't forget the firebombs and nukes
Dropped on palaces and factories
And homes still with people inside
Track Name: Der Musikbrunnen
Oh no, Josephine, I've missed a-strumming on your strings
On no, Josephine, it's been a far too long a time
Oh no, Josephine, you've been a-hidden far away
Oh no, Josephine, too bad we had no better choice

Got to town in good condition, but I knew the weather couldn't last
Clouds rolled in, it just got colder, snow fell and never ever left
Made a hobby of exploring all the alleys and the grocery stores
Went to the top of the Rathaus – it's got nothing on the Arch
Saw the Gardens on their last day, then I started hopping on the train
Rode for free through Niedersachsen, tried to see every single town

I knew needed my music back, so I went to find a guitar
Looked around for the right one, searched the city all up and down
Then I learned that I'd be leaving and I wondered what to do
Too much to carry with me, but I wasn't going to leave you behind
Caught a train off to Colonia, and I brought you there to stay
Came back four weeks later, took back to my new home
Track Name: Der Kölner Dom
On the train along the Rhine
Count the castles along the way
Past Koblenz and the vineyards
In the distance, north of Bonn
You can see the mighty spires
Looking over the city

Leave the station, cross the square
Climb the steps and look around
Once the tallest of them all
Somehow survived through the war
Claimed forever unfinished
Dark and cold but beautiful

In this ancient Roman town
They have built this grand old church
Towering over the rest
Watching history flow by
Track Name: Spring's Awakening
Spring's awakening and so am I
Things are finally turning green
Seasons change and so do I
Suddenly I feel alive again
Snow has finally begun to melt
Days have grown somehow so much longer
Catch the tram, let's go to the park
Cross the bridge, the water's clear

Take the train, I'll meet you there
Let's go walk down by the river
Grab some food over at the market
I'll show you around my part of town

Spring's awakening and so am I
And when you visit I feel high
Let's go out, let's go take a trip
Climb a mountain or cross some borders
Who needs a car when you've got a train
Takes you everywhere and you feel free
Let's go out and find a snack
Falafel Surprise and some Apfelwein

Don't let the skyline intimidate you
It's not Berlin, but it's not so bad
There's plenty here if you know where to look
After a while, you'll come to like it
Track Name: Resident Alien
The time is drawing near
When I will have to leave
Away from this land again
Back in the old homeland

And when I set foot back there
Will it feel like home?
Will it feel alright?
Or will I turn right back around?

This has become my second home
It's hard to lead a double life
To tread two paths at the same time
How do you choose which one to take?

Already over, I have to leave
Track Name: Recollection
After a year of living the dream
It's become hard to recollect it all
All the pictures and the memories
They're all that I have to show for it now
After the dream is over and done
How should it feel when it's all in the past
It all seems distant and so impossible
Now I wonder if it really happened

I ran to Berlin whenever I felt lonely
Meet some friends then head to Tacheles
Or I'd find myself at the steps of the Kölner Dom
Cross the bridge or go walk along the Rhein
Spent the weekends always on a train
Chasing Bauhaus or World Heritage Sites
The mines of Rammelsberg, the Gardens of Wörlitz
The old town of Lübeck, the palace of Würzburg
Museums and churches, the Christmas markets

And at the end, it came in a rush
It must have been some kind of strange dream
Readjustment is no easy task
Should I go back and relive the dream